If this is Thursday it must be postcards, 286 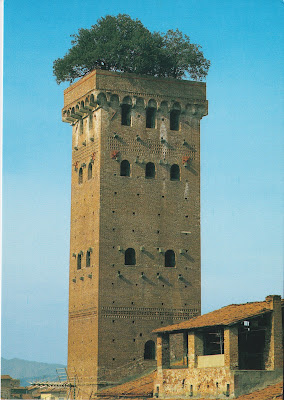 Here are two more postcards sent by my friend while he was on a bicycle trip from northern Italy to Rome.  They both have images from the city of Lucca, Italy.  The upper card has a Ghilardi photograph of the Guinigi Tower built in the 14th century.  Note the garden of trees growing on the top of the tower.  This tower is one of only a few remaining in the city.  The garden on the roof was originally used as a kitchen garden.  The trees are Holm Oaks that symbolize rebirth and renewal.  It is interesting to see this roof garden on the top of a Romanesque-Gothic style medieval tower.  Modern cities also often plant trees over freeways and on the tops of buildings today.

The lower card shows an aerial view of Roman Catholic basilica church, San Michele in Foro (the old Roman forum site).  Dedicated to Archangel Michael it was the seat of the Major Council the most important assembly in the town until 1370.  First mention of this church dates from 795 AD.  Pope Alexander II had it rebuilt after 1070.  The façade dates from the 13th century and has a number of sculptures and inlays some that were remade in the 19th century.   The 4 meter tall statue of St. Michael the Archangel flanked by two other angels at the top left of the church can be seen on the postcard.  Both cards are Santori editions of Lucca. 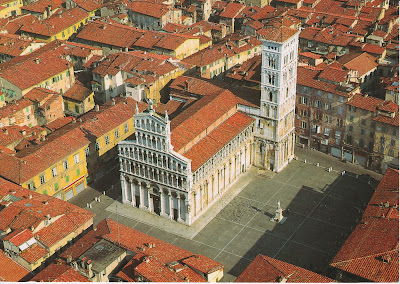 Anciently the city was the site of Ligurian, Etruscan and Roman settlements.  The current day city of Lucca has kept the street plan dating to when it was a Roman colony in 180 BC.  The walls around the old town have remained intact and traces of an old Roman amphitheatre can still be seen in the Piazza dell’Aanfiteatro.

Like many ancient and medieval cities Lucca was a fortress and subject to periodic plundering and sieges.  Lucca prospered with silk trade beginning in the 11th century.  It was also a feudal capital in Tuscany during the 10th and 11th centuries.  For almost 500 years Lucca was an independent commune republic.  The rich and varied history through the centuries list times it was sold, seized, ceded, surrendered and liberated.  In 1805 Lucca was conquered by Napoleon, followed by rule by a succession of dukes and duchesses.  In 1861 it was annexed into the Italian State.   Lucca is the birthplace of the famous music composer Giacomo Puccini.