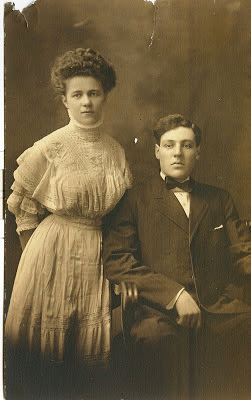 Sigrid Johanne Landaas was born 11 January 1886 in Bergen, Norway.  She is the youngest daughter in the family and the next to the youngest child of those born to Peder Johan Mikkelsen Landaas and Karen Olsdatter Kalvetræ.  With the infant mortality rate hovering around 50% it is amazing that only two of Karen’s eleven children died as babies and nine survived to adulthood.  Sigrid was sixteen the year she moved from Norway to begin a new life in Seattle.  She traveled with her mother, older sisters Klara and Nora and her youngest brother, Trygve arriving in Seattle 1902. 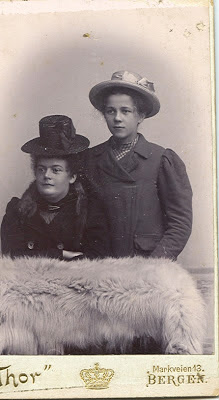 Sigrid with her mother shortly before they left Norway

The Landaas family, as has been mentioned before, was not only large in numbers but a very close family.  They often had parties, picnics and holidays together.  They also were fond of nicknames with Mikkeline as Maggie, Petra often as Pete, and Sigrid as Taxi.  Sigrid got her nickname because she enjoyed riding in taxis from a very early age.  After she met Harry Oliver he started calling her “Tax” and that stuck with all the family eventually calling her Tax.  For the boys, Trygve was shortened to Tryg, Cornelius became Neil and Karen was called Mother by her children and Bestemor by some of the grandchildren but she remained properly Mrs. Landaas to almost everyone else outside the family.

Harry Oliver was born July 1888 in Rich Hill, Bates County, Missouri the second of five sons born to Napoleon B. and Nellie Oliver.  He was always called Harry but his first name was really Willis.  His formal name is sometimes written as Willis Harry, W. Harry, or Harry Willis, Harry W. Oliver.  Oral history stories claim that Nellie was one half or at least part American Indian possibly Cherokee and the 1900 United States Federal Census does show her listed as Indian.  Napoleon’s occupation on that census record is given as wood chopper. 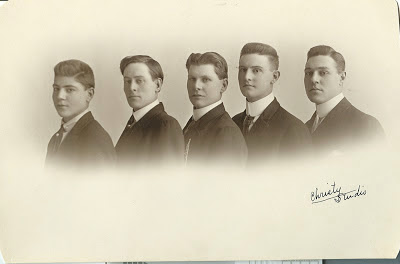 All the brothers were handsome men.  These fellows loved a good time.  They were physical and athletic, often boisterous.  One story about them happened at a show in downtown Seattle.  Something struck one as funny and he started to laugh.  Soon the others joined in, and could not stop no matter how hard they tried.  They tried to muffle the sounds, but to no avail after awhile the theater manager had to throw them out for disrupting the show.  They sat down on the curb and still laughed.  By that time no one could remember what was so funny!

After I.C. Lee died in 1930 my mother stayed for a short period of time with Uncle Neil and his family and then later moved around between the other aunts and uncles but she spent the most  time living with Sigrid and Harry.  They were almost a second set of parents for her. 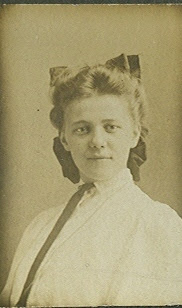 The story of how Uncle Harry met Aunt Sigrid has it that Harry saw Sigrid walking down the street and he decided he had to find out who she was.  He did, they met, fell in love and were married on 12 December 1908.  I think Sigrid’s wedding gown shown at the top is so lovely and very typical of the style for this time period.  On 21 September 1909 they had a baby girl who was born and died the same day, unnamed.  They did not have any other children.  They owned a very successful dry cleaning business called Belmont Dye Works that was located in the Vance Building in downtown Seattle.  Harry had at least two delivery trucks.  This photo of him with one of his trucks was made into a postcard. 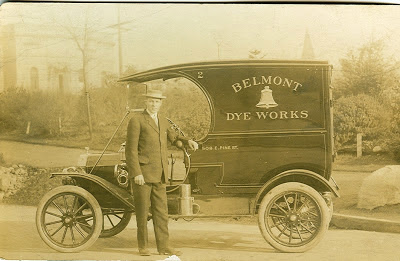 Harry Oliver with one of his delivery trucks, ca 1915

After they sold the Dye Works they bought a Tavern; they also owned a apartment bungalow court on Eastlake Avenue near Lake Union in Seattle.  Those apartments are still there today.

Harry loved to play baseball.  He and his brothers had their own team sponsored by the Belmont Dye Works.  They played towns like Black Diamond and others in the area.  Sigrid kept the score on a big board where all could see it.  She would have to climb up and change the numbers (not unlike Vanna White on Wheel of Fortune!).  Later in his life Harry played golf and was at one time president of the Kenmore Golf Club.  Harry and Sigrid lived in a little house near Northgate when I was a girl.  I can remember visitng them and loving to have Uncle Harry tell stories about bears in the woods.  He was great storyteller.  He played Santa Claus for the whole Landaas family and only lost his anonymity because one of the grandchildren recognized his shoes.

Although they did not have any other children after the daughter who died, they did care for a boy named Tommy Boswell for several years.  Tommy’s parents were customers at the Dye Works.  His father was a rug buyer for a store and his mother was a gypsy.  Tommy was one of several children in the family; two were dancers of some note.  Apparently Tommy was a very cute little boy and the Olivers admired him.  One day Tommy and his mother came into the Dye Works and his mother asked Sigrid and Harry if they would mind watching Tommy for a while.  They agreed but his mother didn’t come back.  In fact, she didn’t come back for several years!  Tommy became an unofficial foster child.   Tommy often heard Sigrid call Harry “Sweet Daddy” or “Big Daddy” and Harry call Sigrid “Tax.”  He kept in touch with the Olivers after he moved back with his own family and in later years gave them a gift of monogrammed towels.  One said “Big Daddy” and the other “Nails.”  Tommy had thought the Tax for Taxi was Tacks for Nails.  They had a big laugh about of it and kept the towels for a very long time.

The Olivers were good hearted people, always doing things for others.  My mother said she never heard Harry say a cross word.

Harry passed away 29 December 1952.  Sigrid on 24 November 1962.  They are both buried in the Pacific Lutheran section of Evergreen-Washelli Cemetery here in Seattle.
at 4:16 PM