If this is Thursday it must be postcards, 66 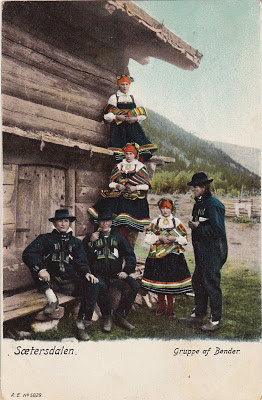 Usually the postcards depicting the Norwegian national costume or bunad show just the women but this one shows both women and men.  The card is from Axel Eliasson’s collection and has the number 5029.  It shows a group of “farmers” from the Setesdal region of southern Norway.  I have seen skirts like these with the bars of bright colors on the hemline fairly often but the bonnet is different from the more plain dark colored one and I do not think I have ever seen a photo showing the striped shawl.

These lovely national costumes of Norway are many and varied.  With grandparents, great-grandparents and great-great grandparents coming from Hardanger, (Hordaland and Bergen), Setesdal (Aust and Vest Agder), Rogaland, Sogn og Fjordane and Telemark I think I can choose just about any one of those places for a bunad of my own.  But they are all so beautiful and slightly different that it is hard to know which one I might find as a favorite.  Mrs. Gimlet does Hardanger embroidery so for her the choice is simple, Hardangder it is.  She wants to do the embroidery work herself but patterns are not available in the United States so she will have to find someone in Norway to help out--a project for sometime in the future.  The red vests and dark skirts with the brilliant white Hardanger aprons are very striking.  We see quite a few of this popular style here in Seattle as there is a large Norwegian American contingent that had its origins in or near Bergen, Norway.  The photo of this woman wearing the Hardanger costume was taken at Yulefest last year. 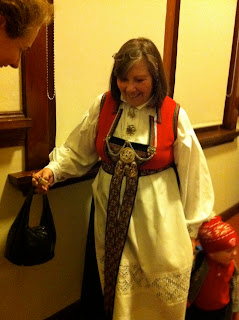 I rather like the crewel embroidery found on the Vest Agder and Telemark costumes and also the shawls from Vest Agder.   Pictured below is an especially lovely bunad, simple but with some color and one not as commonly seen here as the Hardanger costume.  Note the dark skirt has the colored bands at the hem similar to those on the postcards above and below as well as beautiful embroidery.  Rune tells me that he sews and graciously shared this photo of his lovely wife, Anne, wearing the Vest Agder costume. 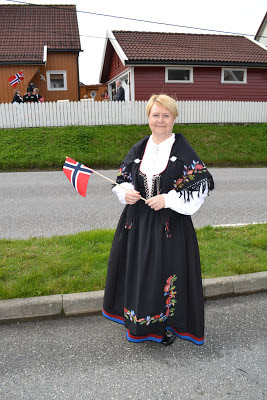 The skirts on the Setesdal costume on the card at the top are actually double skirts as can be seen on the card below that shows a girl and boy.  The girl’s skirt has been lifted a bit on one side so we can see the underskirt with additional ribbons of contrasting color.  The dress looks more like a pinafore in both postcards.  The girl is wearing the style bonnet or scarf most often shown with this costume quite different from what the women are wearing in the top card.  The young man’s hat does not have the wide brim seen on the men above either.  His shoes have a green over piece while the men above are wearing plain shoes.  Another difference is the length of the skirt.  Most of the current costumes worn today have long skirts but this design on the postcards is knee or just below the knee length instead.  It made me wonder if perhaps there are additional small differences in the costumes within the areas too and not just between the various counties.  In the lower left corner of the card below is written Eneberettiet, J.F.  EFTF   That may be the publisher’s information. 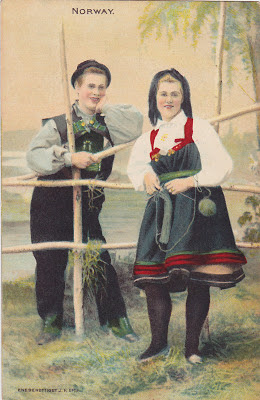 For more pictures of the  various Norwegian traditional costumes here is a link: