If this is Thursday it must be postcards, 444 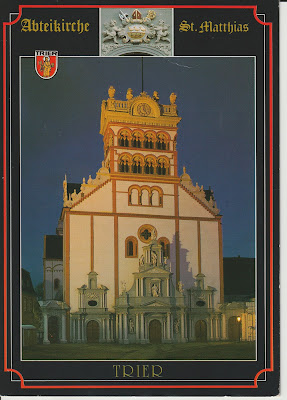 This used postcard shows a front view of St. Matthias’ Abbey.  It is a Romanesque abbey-church that dates from the 10th and 12th centuries and is located in the city of Trier, Germany.  There is a short blurb on the reverse of the postcard at the upper left and tourist information at the lower left.  A product of Fotokust Schwalbe, Tier/Mosel the card does not have an identification code or credits for a particular photographer.

Monks have lived at the abbey since antiquity.  In 977 the monastery adopted the Rule of Saint Benedict.  It was originally named after the founders of the Archbishopric of Trier, the first Bishop of Trier, Saint Eucharius and Bishop Valerius, whose bones are preserved there.  The Empress Helena, mother of the Roman emperor Constantine I, is said to have sent the bones of the Apostle Matthias, to Trier.  Those relics were discovered during demolition work on an earlier church at this site in 1127.  At that time abbey church was re-named for and contains the tomb of Saint Matthias the Apostle.  As the only burial place of an apostle in Germany it is a renowned place of pilgrimage because of the tomb.

Through the centuries looting, wars and conflicts between various bishops or abbots have affected the abbey.  During the French Revolution the French army requisitioned it and the monks had to leave.  In 1802 the abbey was nationalized and secularized and still later was sold off.  A local businessman acquired most of the complex and altered it for his own residence.  In addition to the main abbey the property included farmhouses and estate buildings that financially supported the abbey.  After several attempts were made to revive the monastery in the 19th century in 1922 the main building complex was rededicated as a Benedictine abbey and resettled.  During World War II the government suspended the monastery but after the war part of the religious community returned.  In 2004 two monasteries joined into one community devoted to the cure of souls, a hospital, and pilgrimage duties.

Trier is the oldest town in Germany, founded around 16 B.C.  The Lorig branch of our extended family lived and worked in several of the small towns in the surrounding area, such as, Biewer, Kordel, Klüsserath, Lorich, Neumagen, and others.  The land along the Mosel River has several vineyards.   This abbey church may have been a familiar sight to some of our Lorig ancestors. 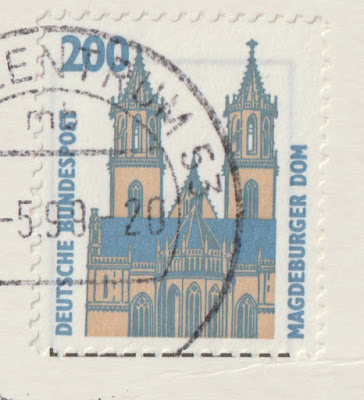 The stamp is one in a series of architectural drawings of historical German churches issued in 1993.  It has a rendering of Magdeburger Dom [Magdeburg Cathedral]. Completed in 1520 as a Catholic church, today it is the oldest Protestant Gothic church in Germany.