If this is Thursday it must be postcards, 421 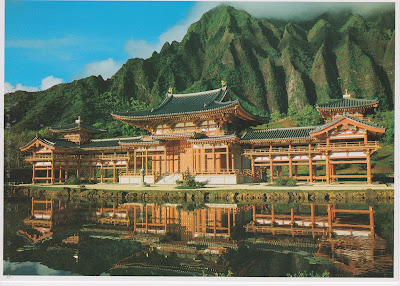 Movie Supply of Hawaii, Honolulu, distributed the unused postcard shared this week.  It has the alphanumeric code of MS-109 at the lower left corner on the reverse but no photographer is given.  It appears to date around 1968 when this non-denominational Buddhist temple was dedicated to commemorate the 100th anniversary of the first Japanese immigrants to Hawaii.

The beautiful temple is a smaller scale replica of the original 900-year-old temple at Uji in the Kyoto Prefecture of Japan.  Unlike a functioning Buddhist temple it does not host a resident monastic community nor have an active congregation.   The original temple, constructed around 1052, was made of wood without use of nails but this replica is largely concrete.  It has an 18-foot (5.5 m) statue of the Lotus Buddha covered in gold and lacquer inside the building and a 3-ton brass peace bell outside.  There are Koi ponds surrounding the temple and around the ponds are lush Japanese gardens.  The gardens are also home to sparrows and peacocks.  The Ko’olau Range can be seen in background.  Thousands of visitors from around the world come here each year.  People of all faiths are welcome to participate in its traditions.  The temple grounds are also used for weddings and other meetings.

In addition to this temple the Valley of the Temples Memorial Park also contains large Catholic statues.  There are crypts and mausoleums on the grounds and thousands of Buddhist, Shinto, Protesant and Catholic residents of Hawaii are buried in this memorial park.  Paul Trousdale founded the park in 1963.

Trivia:  The temple was featured in several episodes of the TV shows Hawaii Five-O and Magnum P.I   The grounds have also been used in the ABC TV series Lost as a stand-in for South Korea and also as the Presidential Villa in seaQuest DSV.  The 2001 movie Pearl Harbor used scenes of the temple as have several other movies.