If this is Thursday it must be postcards, 413 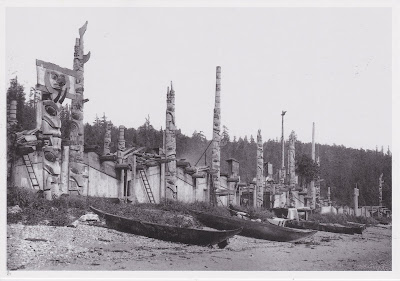 
Today’s featured postcard is another one I found in a shop in Ketchikan.  Richard Maynard is identified as the photographer on the card dated 1890*.  The picture shows a Haida Village, Haida Gwaii also called Queen Charlotte Islands, off the northern Pacific Coast of Canada.  The blurb on the reverse states:  “Each house in this village was identified with crests which were displayed on mortuary poles and house front.”  The card was printed in Canada and is a Native Elements product, NativeNorthwest.com, Vancouver, B.C., Canada.

There are between 40 and 60 islands in the archipelago that includes the two main islands, Graham Island (Kiis Gwaay) on the north and Moresby Island (Taawxii Xaaydaga Gwaay.yaay linagwaay**—south people island or Gwaay Haanas—islands of Beauty). There are also approximately 150 smaller islands.

Archaeologists have established that the Haida people have lived on the islands for 13,000 years.  Today form about half of the population.  They have their own acting government called the Council of the Haida Nation.  The islands were formerly known as the Queen Charlotte Islands or “the Charlottes.”  In 2010 the Haida Gwaii Reconciliation Act, in an agreement between British Columbia and the Haida people, renamed them.

The Haida population was around 30,000 inhabitants until the Europeans arrived bringing with them diseases such as smallpox, measles, typhoid, and syphilis.  About 90% of the people died from these illnesses during the 1800s.  By 1900 there were only 350 people remaining and many of the towns and villages had been abandoned.  Today the population living on the islands is about 4,500.  Many of the native peoples moved to cannery towns on the mainland or to Vancouver Island.  The two remaining active island communities are Skidgate, shown on the postcard, and Old Massett, each having a population of about 700 individuals.

It is not known for certain how the original Haida people came to settle the islands but anthropologists have found striking parallels between the inhabitants of the Kamchatka Peninsula and those of the native peoples of the Pacific Northwest Coast.

The photographer, Richard Maynard (1832-1907) was Canadian and known mainly for his pictures featuring landscape views of British Columbia, coastal Alaska, and the Pribiloff Islands of the Bering Sea.  Maynard’s wife, Hannah, was also a photographer.  Many of his prints and personal papers were collected by Charles Newcombe.  The negatives of pictures taken by both Maynard and his wife were donated to sold by the son, Albert, to the British Columbia Archives.

For additional information about Haida Gwaii and other examples of Maynard’s photography, see:

*  There is another similar photograph on Wikipedia that is labeled “Houses and totem poles, Skidegate, 26 July 1878 (George Mercer Dawson, Geological Survey of Canada, NAC-PA-37756).”   I’m not sure if both are the same photograph or two different pictures of the same village taken at different times.

**The native names use diacritical marks and letters that I do not have on my computer so these may not be spelled exactly as they should be.
at 6:47 AM