If this is Thursday it must be postcards, 375 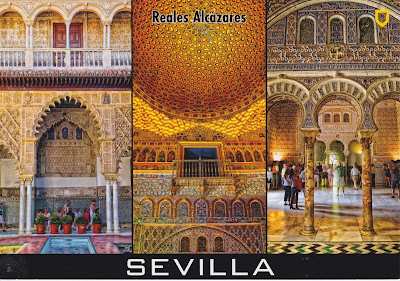 This unused postcard is another sent by my son and his wife from their trip to Portugal and Spain earlier this year.  Printed in Spain and bearing the number 044 in the space for the stamp on the reverse, the photographer is identified as Angel Olivares.  The publishers/printers are L. Domingues, S.A. of Madrid, Editorial Fisa Escudo de Oro, S.A.

The scenes on the card are from the Alcázar of Seville, a royal palace built in the 1360s for the Christian king Peter of Castile who is sometimes called Pedro the Cruel of Castile.  In 1987 UNESCO registered it as a World Heritage Site and it is the oldest royal palace still in use in Europe.  The place where the castle is situated has been occupied since the 8th century B.C.

A map of the palace shows a spreading group of different sections stitched together in a rambling fashion to form a large complex.  Originally the palace was built in the Moorish style for a Christian ruler.  The old portion of the palace has some of the best examples of Mudejar architecture despite the fires and earthquakes that made numerous restorations necessary.  The complex that forms the entire palace has definite sections dating to different eras:  Moorish (11th – 12th century); Gothic (13th century); Mudejar (14th century); and Renaissance (15th – 16th century).

The left panel on the card shows a pool and plants as well as Moorish carvings and tile work.  It is not labeled on the card but it looks like it may be part of the Patio or courtyard famous for sunken gardens and a reflecting pool.  The gardens contain a variety of fruit trees as well as fragrant flowers.  The garden-orchard supplied food for the palace residents.  Water was used for irrigation as well as in pools, ponds, and fountains that were pleasing to the eye.  The gardens have undergone many changes during the years.

The center panel shows the Ambassador’s Hall with its gold dome, representing the heavens, the most spectacular room in the palace.  There are several lavish reception rooms in the palace like the one shown in the panel on the right.  King Peter used the main room during his stay at the Alcázar.  It is the most richly decorated room in the palace.

Trivia:  In 1526 Emperor Charles V and Isabella of Portugal were married in this room.  The 1729 Treaty of Seville that ended the Anglo-Spanish War of 1727 was signed here.  The palace has been used in the filming of the 5th season of the television version of Game of Thrones and the movie, Kingdom of Heaven.  It is open to the public.