If this is Thursday it must be postcards, 297 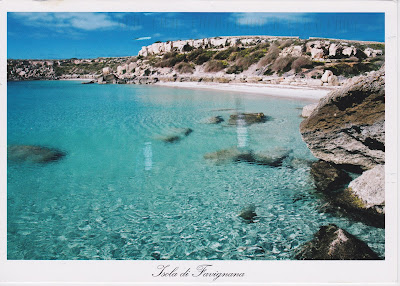 One of a few beaches and azure water lagoons found on this island, this postcard was sent by my friend who lives in Italy.  It is of Isola di Favignana one of three islands just off the west coast of Sicily.  The island is famous for tuna fisheries and is a popular tourist area that can be accessed by hydrofoil from the mainland.  The photograph is attributed to Antonio Noto with the publisher given as Favonia Editrice – Mare Favignana.

The Italian Global Postal Service stamp, below, is for use on postcards only and has to be mailed in a special yellow and black GPS box.  The postcards are sent to a central hub for sorting.  The average time for a postcard using one of these stamps to reach a destination in the United States is supposed to be around 18 days.   This card took 3 months to reach me. 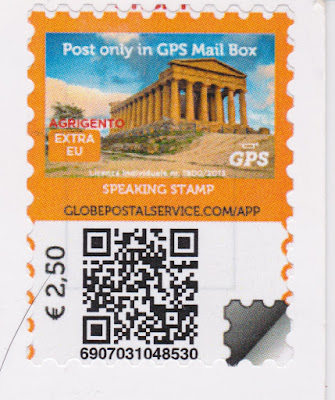 Anciently this island was called Aegusa or “goat island,” which made me wonder if there were wild goats living there once.   Today the name is derived from an Italian word, Favonio, describing the local winds.  The island was a stopping point on trans-Mediterranean trading routes used by the Phoenicians until the defeat of the Carthaginian army during the First Punic War.  A major naval battle took place just off the shore when two hundred Roman ships defeated a Carthaginian fleet of 400 ships.  The Romans sank 120 ships and took 10,000 prisoners.  One legend says that so many dead washed a shore that the northeastern shoreline was called Red Cove for the bloodshed; however, the name actually comes from the red clay on the beach not from blood.

Favignana was captured by Arabs during the early Middle Ages and used as a base to mount the Islamic conquest of Sicily.  Later Normans took possession of the island building fortifications there as early as 1081.  During the 1400s Giovanni de Karissima was granted the island and called himself the Baron of Tuna for the plentiful tuna found offshore.  The Spanish also fished off these waters from the 1600s onward.  Besides the fishing there are Calcarenite quarries found here.  During the 19th century stone was exported mostly to Tunisia and Libya.

Island economy suffered between the two World Wars but in recent times tourism has turned things around.  Because the island is very rocky there are few beaches like the one shown on the postcard.  It is, however, a popular site for scuba diving and snorkeling and the calcarenite rock caves are famous.  The island also has an active working lighthouse at the westernmost point of the island.  The original lighthouse was built in 1860 and shaped like a turret.  In 1904 it was rebuilt as a tapered cylinder with a balcony and lantern with a spiral staircase of 200 steps inside.  In 1935 the tower was renovated and the height was reduced to 125 ft or 38 m.


As always, many thanks to my friend who sent the card.