If this is Thursday it must be postcards, 294 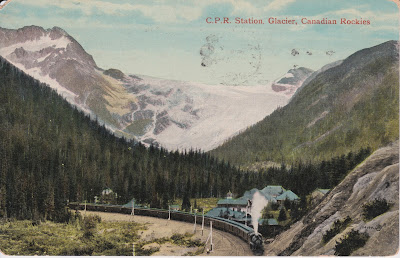 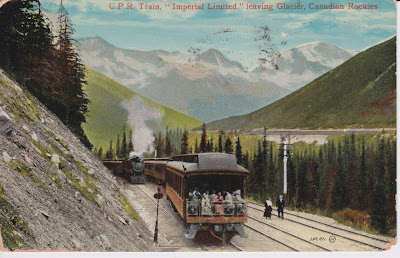 A few weeks ago we went the Washington State [model] Train Show held at the Monroe fair grounds where I found these two postcards plus a couple of other cards.  The top card has a picture of the Canadian Pacific Railway Station at Glacier in the Canadian Rockies; the bottom card shows passengers on the rear car of the Imperial Limited.  Both cards are from Valentine Publishing Co., Ltd. of Montreal and Toronto printed in Great Britain.   The top card has the number 108999 (JV) the lower card has 109,871 (JV) both in the lower right front corner.  The double globe logo on the reverse says V&Sons Famous Throughout the World.

Although the cancellation date is difficult to read it is possible to see that the cards were mailed a day apart from Vancouver, British Columbia to the same address in Duluth, Minnesota.  When I picked them up I did not read the handwritten messages on the cards immediately only to be delighted when I got them home to see that one was sent to a sister and the other to a nephew.

A quick check of the census records revealed the names—Mrs. H. Nesbitt was Victoria “Dora” Henrietta, Dodo on the note, and her sister was Amelia Kugler.  Amelia signs herself as Amineked on the card to her nephew Garven, addressed in the note as Gagon.  Since Garven was born in 1907 and his brother Trevanion was born 1911, these cards must have been sent between 1911 and probably no later than 1914 as the boys are referred to as “Babies” on the card to Victoria.   Also, the stamp is a King George V, one cent, dark green, was first issued in 1911 . 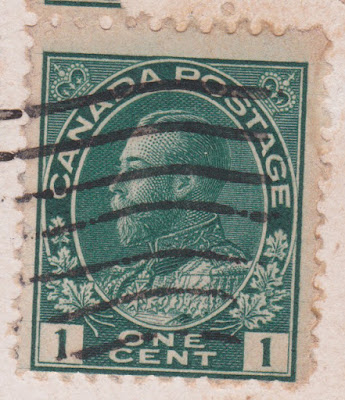 In the note to her nephew, Amelia writes:  “My dear little Gagon, this is where I sat all the way through the loveliest mountains—some day you will come and see them too.   Are you “Good to your Brother” & Mother?  Yes, I know you are!  Amineked sends you a kiss.”

The Imperial Limited was the premier passenger trail of the Canadian Pacific Railway and went across Canada between Montreal, Quebec and Vancouver, British Columbia beginning in 1899 until 1933.  Rail travel across Canada had been offered since 1886 but in 1911 new cars replaced the older ones and year round service was introduced.  This was a luxury train with sleeping and dining cars catering to travelers wanting to see the scenic Rocky Mountains and stay in Canadian Pacific chalets like the Banff Springs Hotel and Chateau Lake Louise.  William Cornelius Van Horne, the renowned railway executive, was quoted as saying:  “Since we can’t export the scenery, we will have to import the tourists.”