If this is Thursday it must be postcards, 270 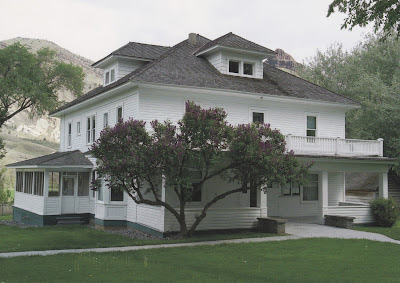 We stopped at the John Day Fossil Beds National Monument in eastern Oregon on the return trip from Utah in August this year.  While we did not stop at the Cant Ranch I did pick up this postcard of the house when we went through the visitor center.  The ranch property extends on both sides of the John Day River in the monument and was originally homesteaded by Floyd Officer in 1890.  It was later sold to James Cant in 1910 who increased the size and built a modern ranch complex on the west bank of the river.  The Cant family sold to the National Park Service in 1975 and the ranch property was incorporated into the National Monument.  The main 2 ½ story wood frame house shown on the card was used as the visitor center until 2003 and is used as the monument headquarters an interpretive center today.  This card was published by Northwest Interpretive Association, printed in the USA and has the identification JODANM-06-NW1A2005.

Before the arrival of European settlers the John Day River area was used for thousands of years by Native Americans as seasonal hunting and fishing camps.  Gold was discovered in 1862 and a number of small mining towns were established in the area.  The Homestead Act of 1862 encouraged settlement by offering grants of 160 acres to American pioneers so it was not long after the miners that homesteaders arrived.  Most of the ranches of that era produced beef cattle but by 1890 most of the livestock was sheep.  It took Floyd Officer seven years to prove his claim and get his land patent in 1898.
James Cant left Scotland when he was 20 years old and went first to South America where he stayed five years raising horses and mules.  In 1905 he immigrated to the United States arriving in New York City and traveling overland to the John Day country in Oregon where there was a substantial population of Scottish immigrants.  He was hired as a sheepherder and by 1908 he had saved enough money to send to Scotland for his childhood sweetheart, Elizabeth Grant, to join him where they were married in Canyon City, Oregon in October 1908.  He continued to work herding sheep two more years until he saved enough money to buy the Officer ranch.  This very successful ranch became a popular overnight stopping place for people traveling between Dayville and the Columbia River.

The Cant’s hospitality was well known and they often served meals to twenty or more people including family and ranch hands.  The main house was part of a major expansion by the Cants between 1915 and 1918 when most of the original Officer buildings were replaced.  The house on the card was built in 1917.  The Cant family continued to raise sheep even through the Great Depression then transitioned to cattle in 1946.  Until the completion of Highway 19 in the mid 1920s the ranch was mostly isolated.

Many of the old buildings are still standing on the property and provide visitors the opportunity of experiencing eastern Oregon’s ranching heritage.  Some of the structures are in poor condition but others, such as the bunkhouse, were renovated and are used to house exhibits.  The chicken coop still has chickens and the shed is used to store feed and ranch equipment.  A small log cabin from when the Officer family lived there is the only remaining building of the original ranch.

Sheep Rock, shown in the postcard below, and named for the sheep that used to dot its slopes, can be seen from the ranch.  The card was published by Discover Your Northwest, printed in the USA and has the identification JODAM-P016-DYNW2013. 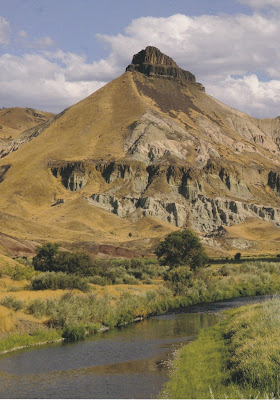