If this is Thursday it must be postcards, 254 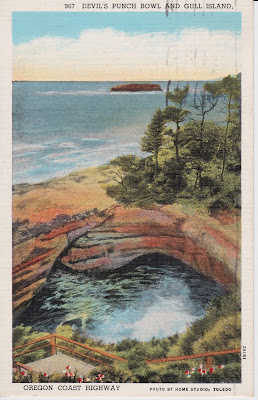 This Linen Type postcard is another printed by the Wesley Andrews Co., of Portland, Oregon and was mailed from Eureka, California postmarked 1939.  As mentioned in an earlier postcard Thursday Wesley Andrews Co. was famous for postcards featuring nature scenes, especially areas along the Oregon coast.  This photo is attributed to Home Studio, Toledo, Ohio.  The card has two numbers on the front, 967 by the title at the top margin and 2A181 in the right hand side margin.

The reverse side has the Wesley Andrews logo at the top center and the logo for Curt Teich and Colortone of Chicago, Illinois at the bottom center.  Many of the Colortone cards were printed as Linen Type since that format allowed for the best color reproduction.

Devils Punch Bowl is a State Natural Area in central Oregon.  The large bowl shape was carved in a rocky headland that is partly open to the Pacific Ocean.  It is thought that the bowl was created by ocean water when two caves collapsed.

Devils Punch Bowl is about 8 miles north of the resort town of Newport, Oregon.  The park includes picnic grounds, has a trail access to the beach.  Also to be found in the park are tide pools.  Off shore about ½ mile is Gull Rock where the waves are attractive to surfers.   Whale watching is another activity in this area.

The land was acquired in three parcels between 1929 and 1952 with the Civilian Conservation Corps doing the work to install fresh water systems, sanitary works, picnic tables, stoves, trails and safety fences.  It is a popular park and receives more than 200,000 visitors during the busiest season of June through October. 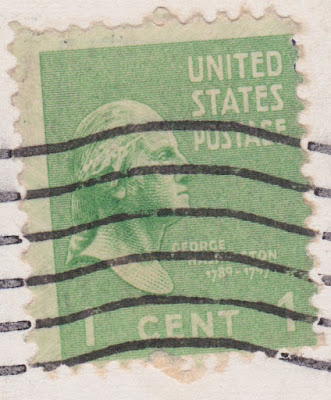 The stamp is a green 1938 George Washington profile stamp.  President Franklin Roosevelt, who was an avid stamp collector, suggested this set of stamps to honor past American presidents.  A national contest was held and out of over 1200 entries this design by Elaine Rawlinson, a New York art student, was chosen for the Washington stamp.  This stamp was used on postcards and letters from 1938 through the late 1950s.