If this is Thursday it must be postcards, 246 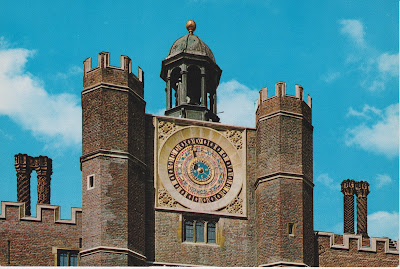 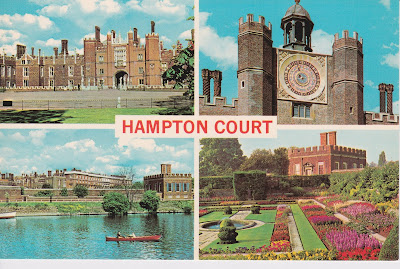 
These two postcards come from the collection of travel cards shared by Jim and Kelsey.  They are Natural Colour Series, Photo greetings U.S.A. and Great Britain and published by the Photographic Greeting Card Co., Ltd., of London, England.


The top card shows the Astronomical Clock, a 16th century clock in Hampton Court Palace.  Designed by Nicholas Crazter and made by Nicholas Oursian the clock was installed on the gatehouse to the inner court in 1540 and is still functioning today.  It is 15 feet or 4.6 meters in diameter with three separate revolving dials made of copper and moving at different speeds to display the hour, month, day, position of the sun, signs of the zodiac, number of days since the beginning of the year, phases of the moon, and the hour the moon crosses the meridian when the water is at the highest point at London Bridge.  The high water time was of great importance since barge was the preferred method of transport and during low water there were dangerous rapids.  William Herbert did a restoration of the clock in 1711.  By 1831 the astronomical dial had been removed and replaced by a 1799 mechanism from a clock at St. James’s Palace.  In 1879 the astronomical dial was found and Gillett & Bland manufactured a new clock movement.  The Cumbira Clock Company made a full restoration in 2007-2008 in time for the 500th anniversary of the accession of King Henry VIII.


The second card shows four views of Hampton Court Palace and grounds.  Located in Greater London at Richmond upon Thames, Hampton Court is a royal palace, one of only two surviving palaces owned by King Henry III.  Today it is open to the public and a major tourist attraction.  An independent charity, Historic Royal Palaces, cares for the buildings and grounds without funding from the Government or the Crown.


Thomas Wolsey, the Archbishop of York and Chief Minister of Henry VIII, took over the property in 1514 from the Order of St. John of Jerusalem.  During a seven-year period of time beginning in 1515 he spent 200,000 gold crowns to build the finest palace in England.  Little of Wolsey’s building remains unchanged; however, his seal is still visible over the entrance arch of the clock tower.  There were 44 lodgings reserved for guests with the very best state apartments set aside for the King and his family.  Henry VIII stayed there immediately after the apartments were completed in 1525.  Wolsey fell out of favor and knowing that his enemies were planning his downfall, he passed the palace to the King as a gift in 1528.


Henry VIII added the Great Hall, the Royal Tennis Court, and vast kitchen designed to feed his court of 1,000 people.  His only son, Edward VI, was born at the palace.  When Henry VIII died in 1547 he was succeeded first by his son, then by both his daughters.  Queen Elizabeth I had the eastern kitchen built that has since become the palace’s public tea room.  Rebuilding and expansion projects were undertaken in the late 1600s by William of Orange and Queen Mary II.  Sir Christopher Wren, the architect of St. Paul's Cathedral, drew the plans and William Talman was selected as master of works.  A vast new palace somewhat resembling Versailles was to be built piece by piece, first demolishing existing antiquated parts of the palace and replacing them with new sections including two courtyards.  The project was not finished, however, and the palace ended up with two architectural styles, domestic Tudor and Baroque.  Pink bricks were used throughout giving the structure unity and symmetry was achieved with the low wings.  King George II was the last monarch who lived in the palace.

The palace is home to many works of art and furnishing from the Royal Collection.  Much of the original furniture dates from the 17th and 18th centuries.  There are several state beds still in their original positions.  A crystal chandelier dating about 1700 hangs in the King's Privy Chamber which also contains the Throne Canopy.  The King's Guard Chamber has arms, muskets, pistols, swords, daggers, powder horns and pieces of armor displayed on the walls.

With thanks to Jim & Kelsey as always for sharing the postcards.