If this is Thursday it must be postcards, 140

We took a short trip to the Columbia River Gorge, Oregon and these three postcards were purchased at the Crown Point State Park Vista House.  The first two cards below have photographs taken by Steve Terrill.  The cards are Impact photo graphics postcards distributed in the United States, printed in Korea.  It shows the Vista House that was designed by Edgar M. Lazarus and built between 1916 and 1917 then officially dedicated and opened to the public in May 1918.  Vista House is a monument to the early Oregon pioneers and stands 55 feet high with marble floors and stairs.  It also has marble restroom facilities on the lower level.  The domed octagonal rotunda is made of limestone and is 44 feet in diameter on the main level the lower level is slightly bigger.  The Vista House was listed on the National Register of Historic Places in 1974.

This second postcard picture shown below is a view taken from Chanticleer Point along the highway some distance away.  It shows the promontory 733 feet above the Columbia River where Vista House is situated.  Samuel Lancaster, the highway engineer for the project proposed that an observatory be built here to afford views up and down the Columbia River. 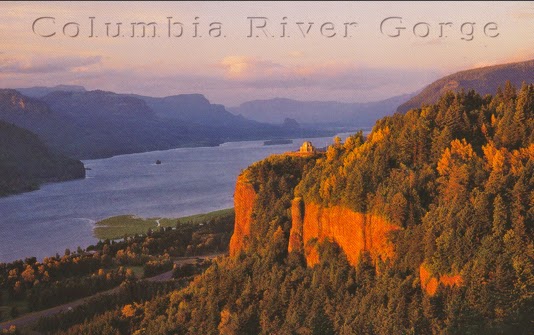 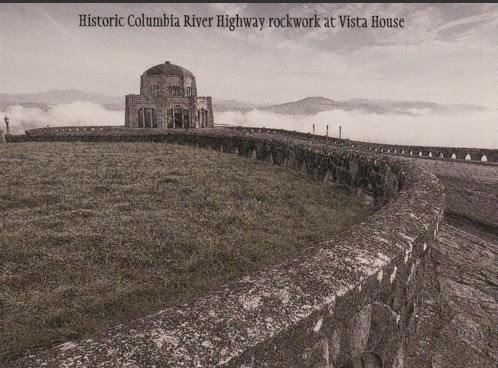 The third card, above, has a black & white photograph by Gregg Kerber for Friends of Vista House and shows some of the stonework. 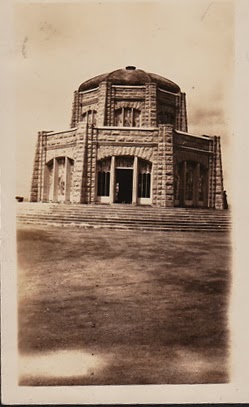 It is not often that I get to visit a place in person that turns up in the collection of old family photos and looks much the same as it did almost 100 years ago but here above is Vista House as it looked when my grandparents, Axel & Anna Hornnes Schroder, visited it in the 1920s.  Below are some photos from the recent trip to the Columbia Gorge. 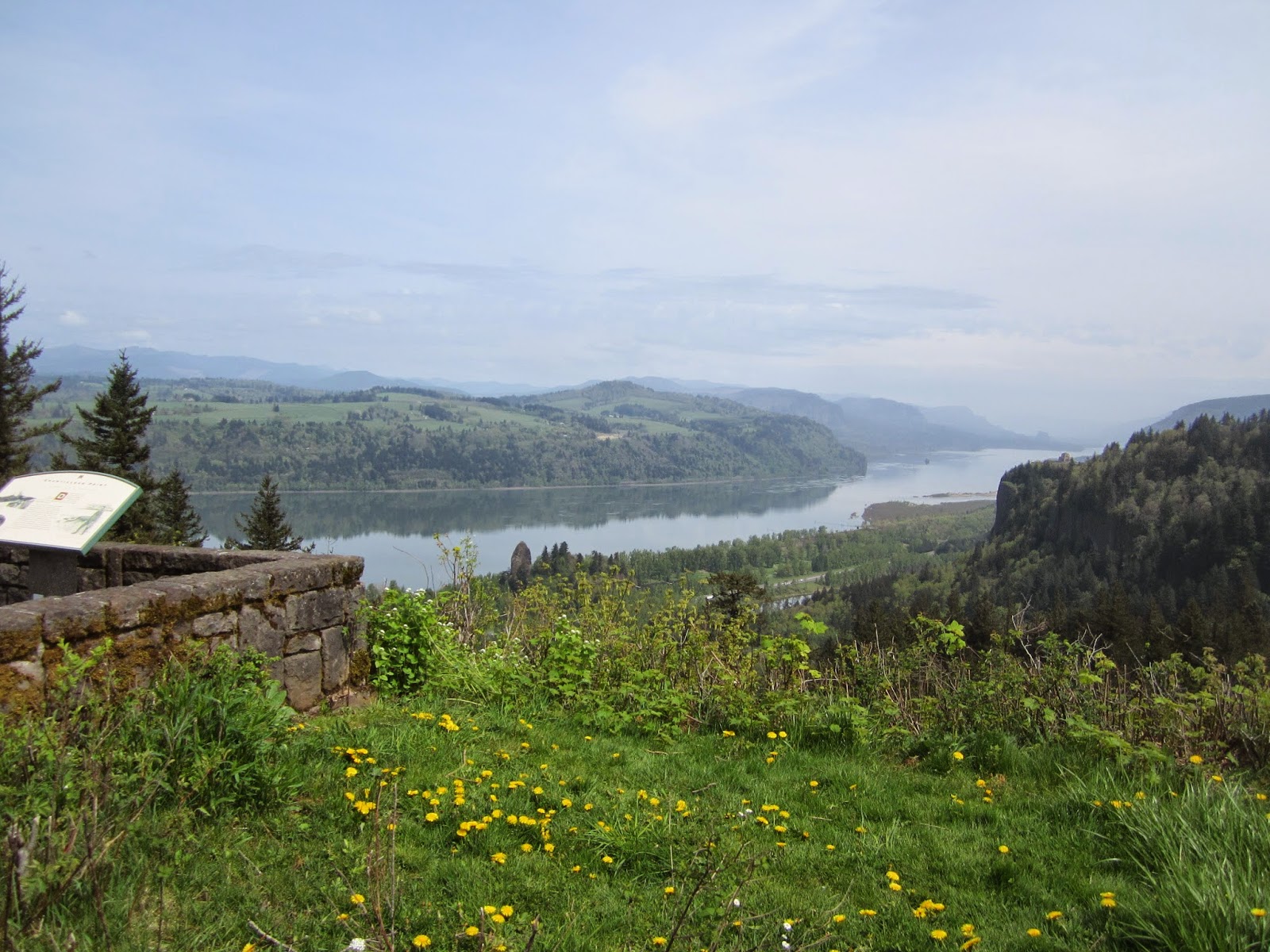 Showing the Columbia River and looking toward Vista House in the distance at the mid right, also visible is Beacon Rock at the mid left. 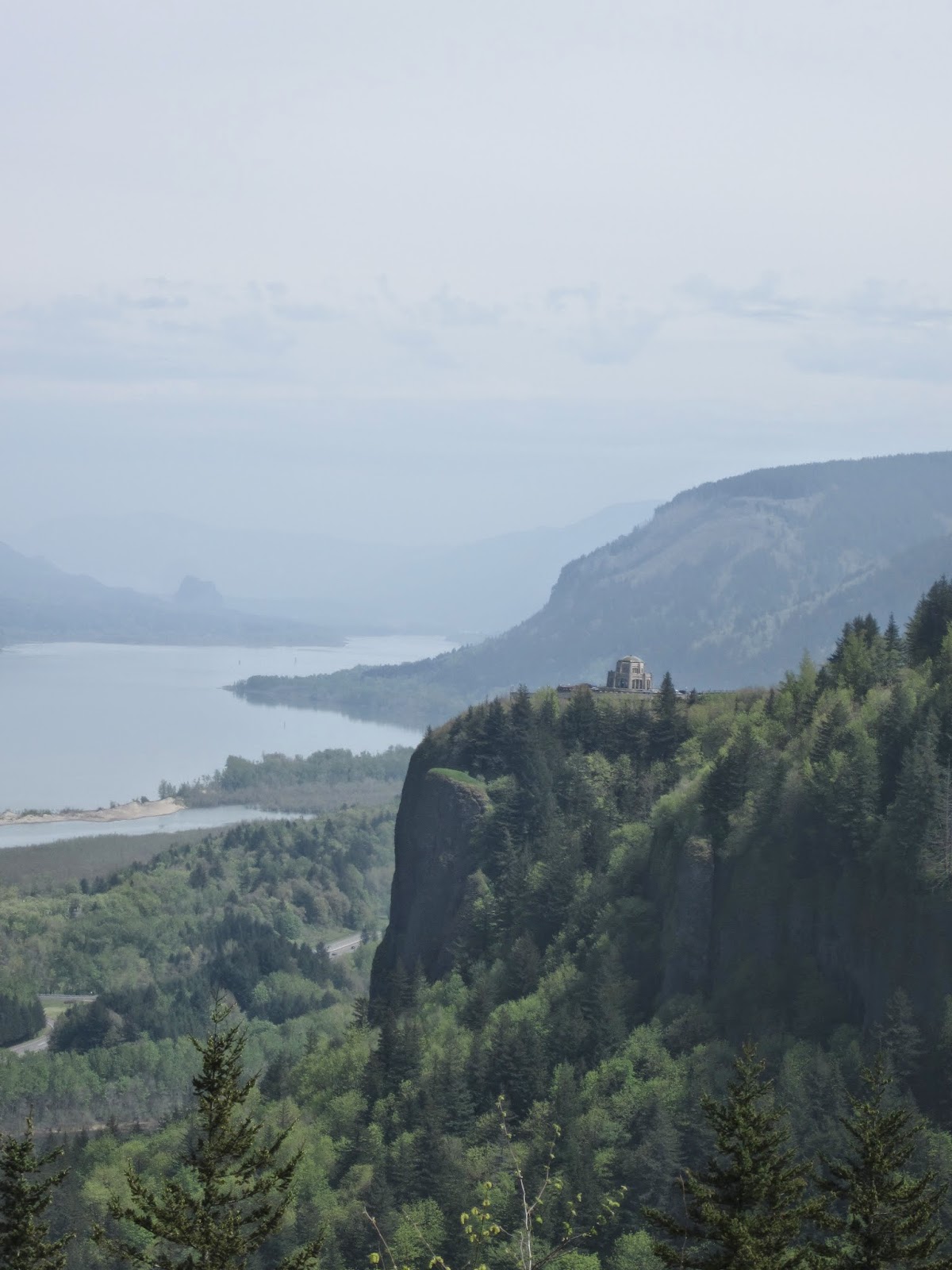 The Vista House from a distance, taken from Chanticleer Point 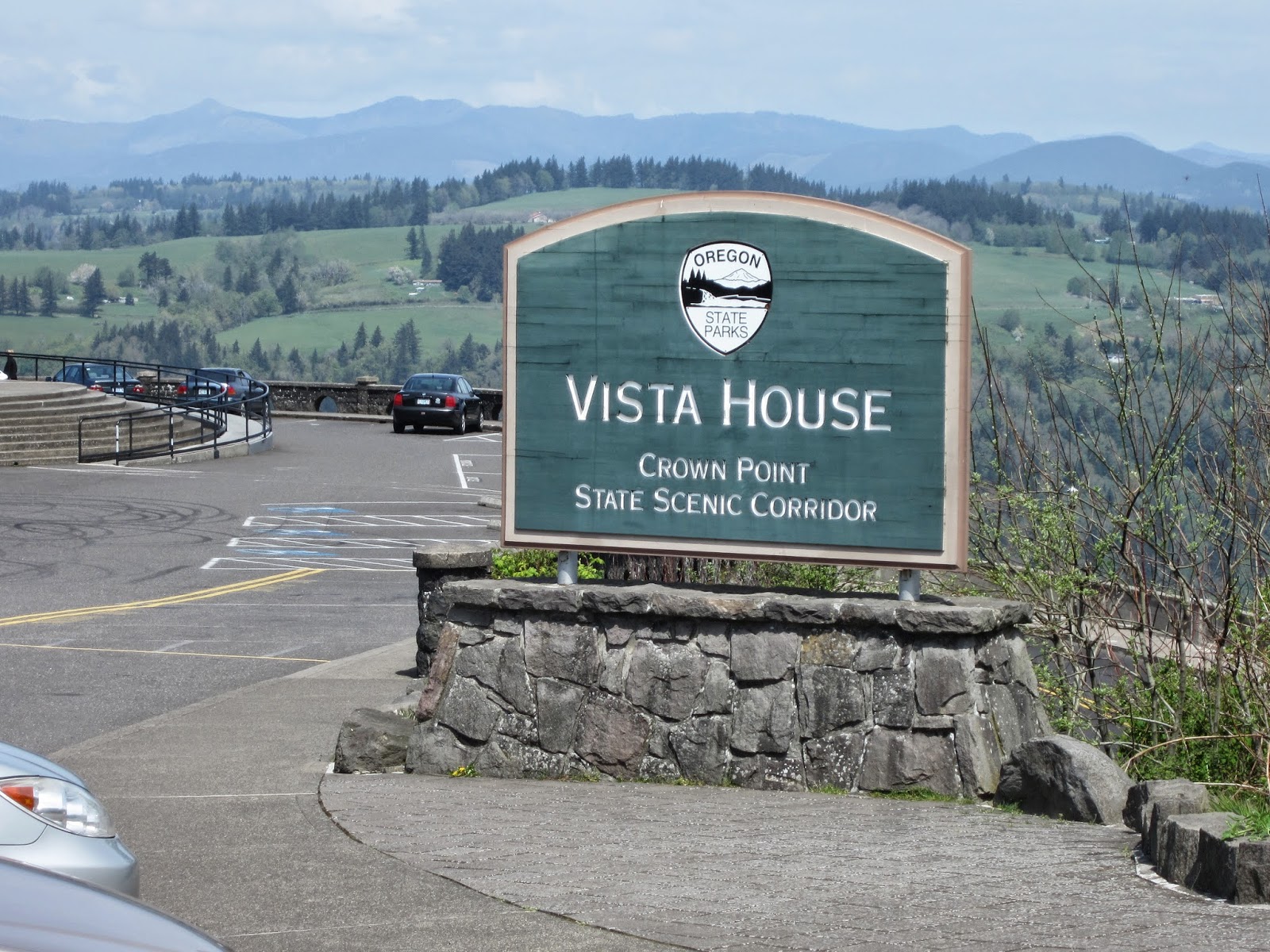 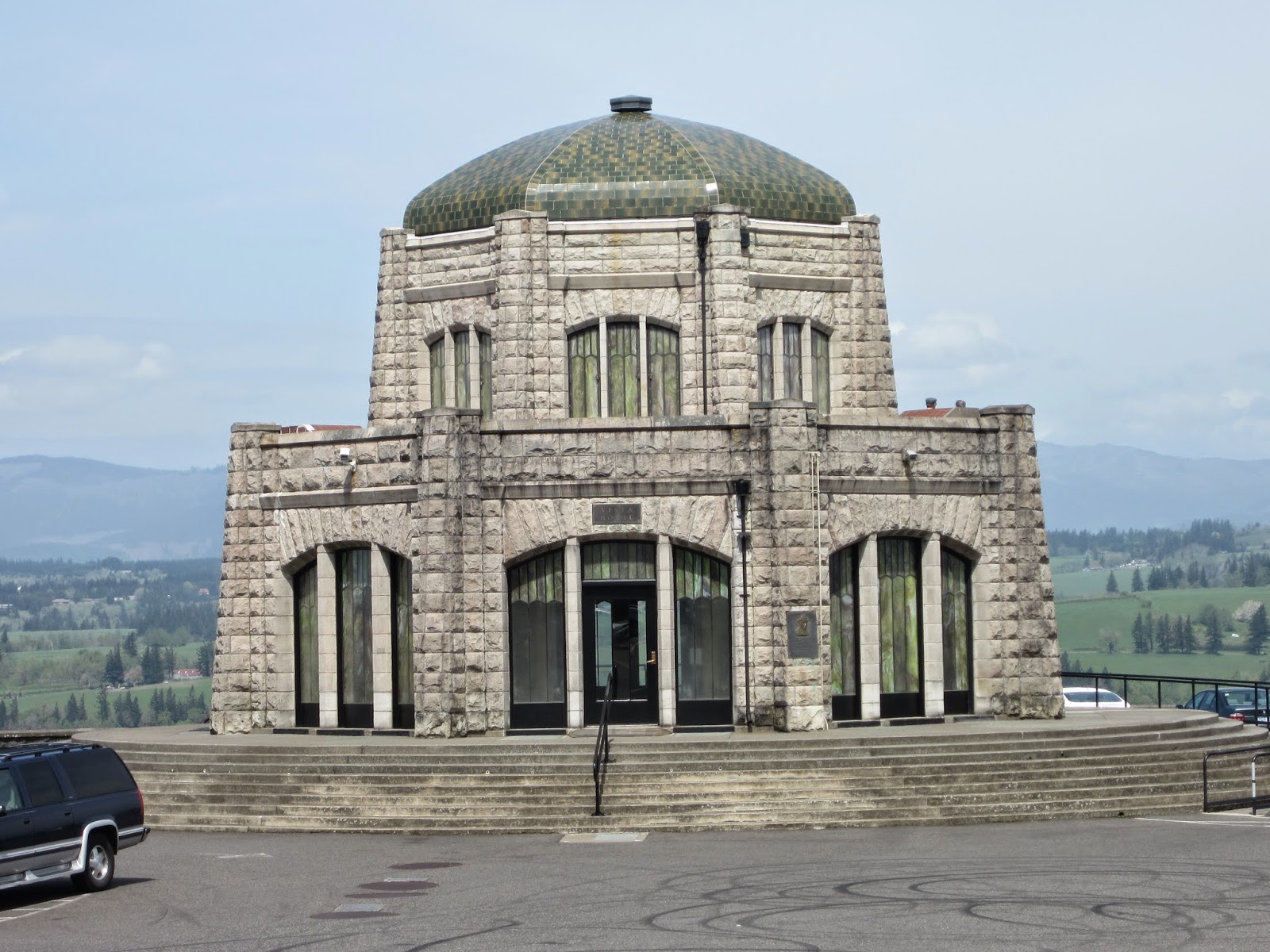 Vista House, 2014, with new roof and other restorations 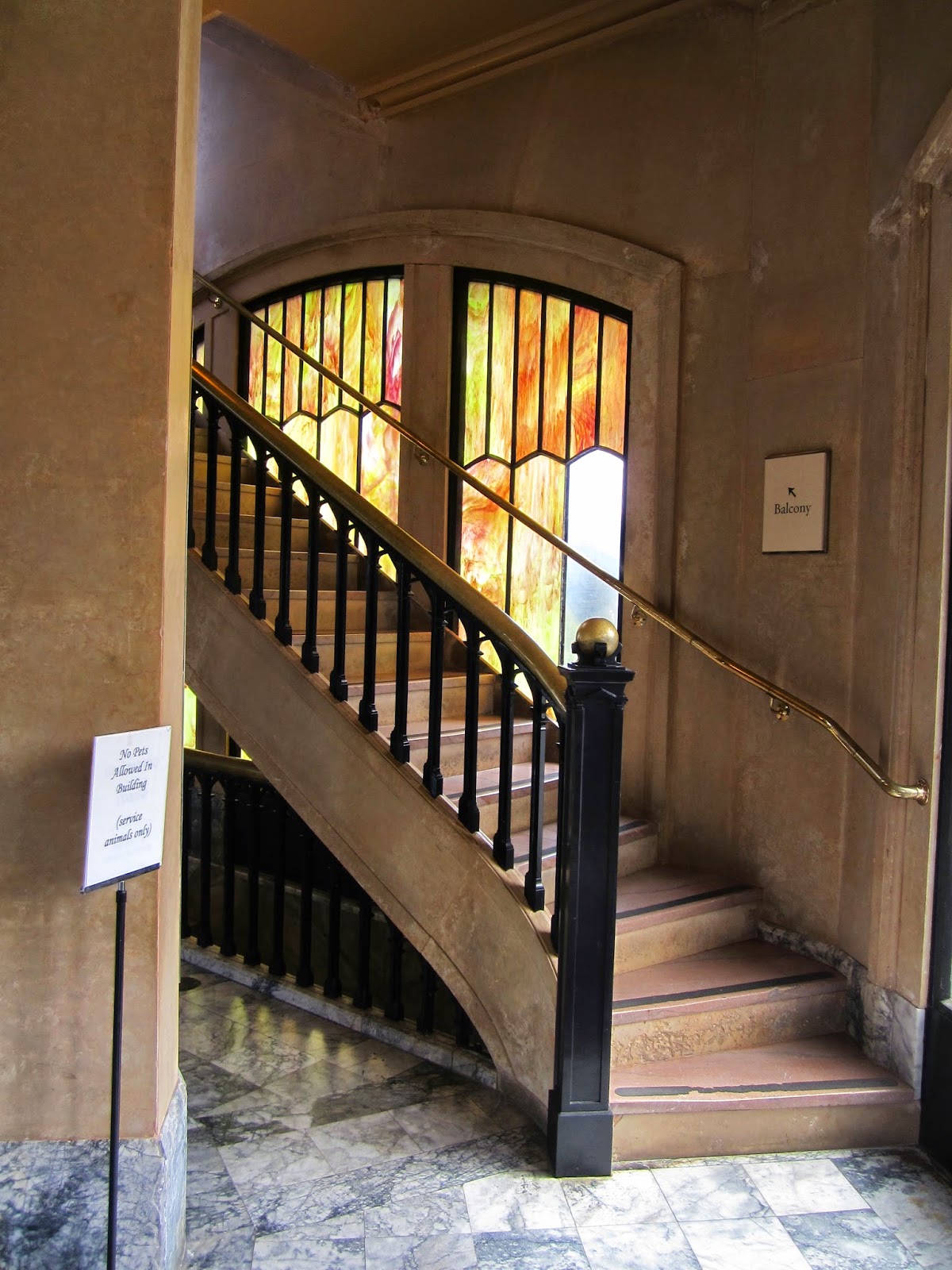 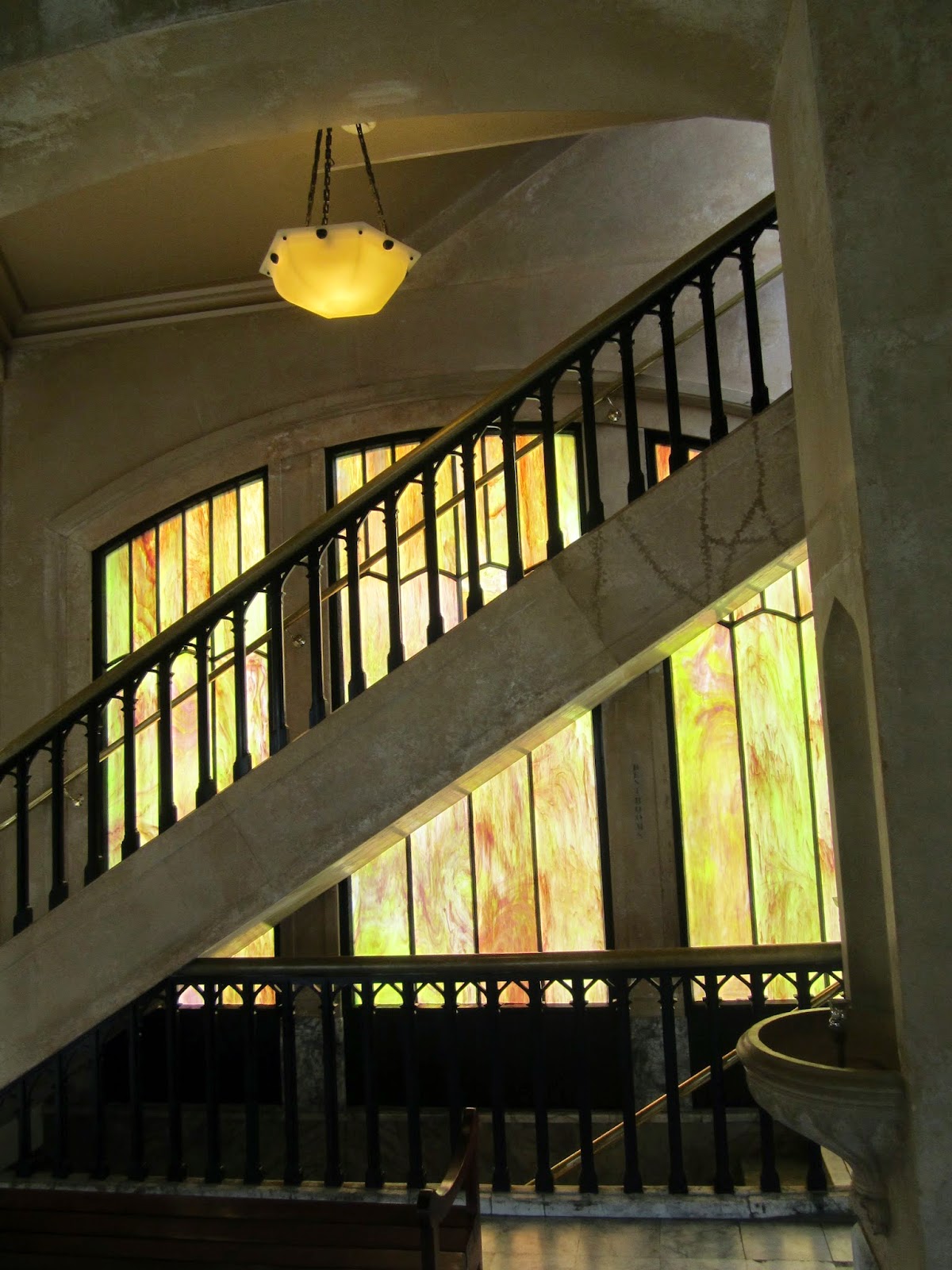 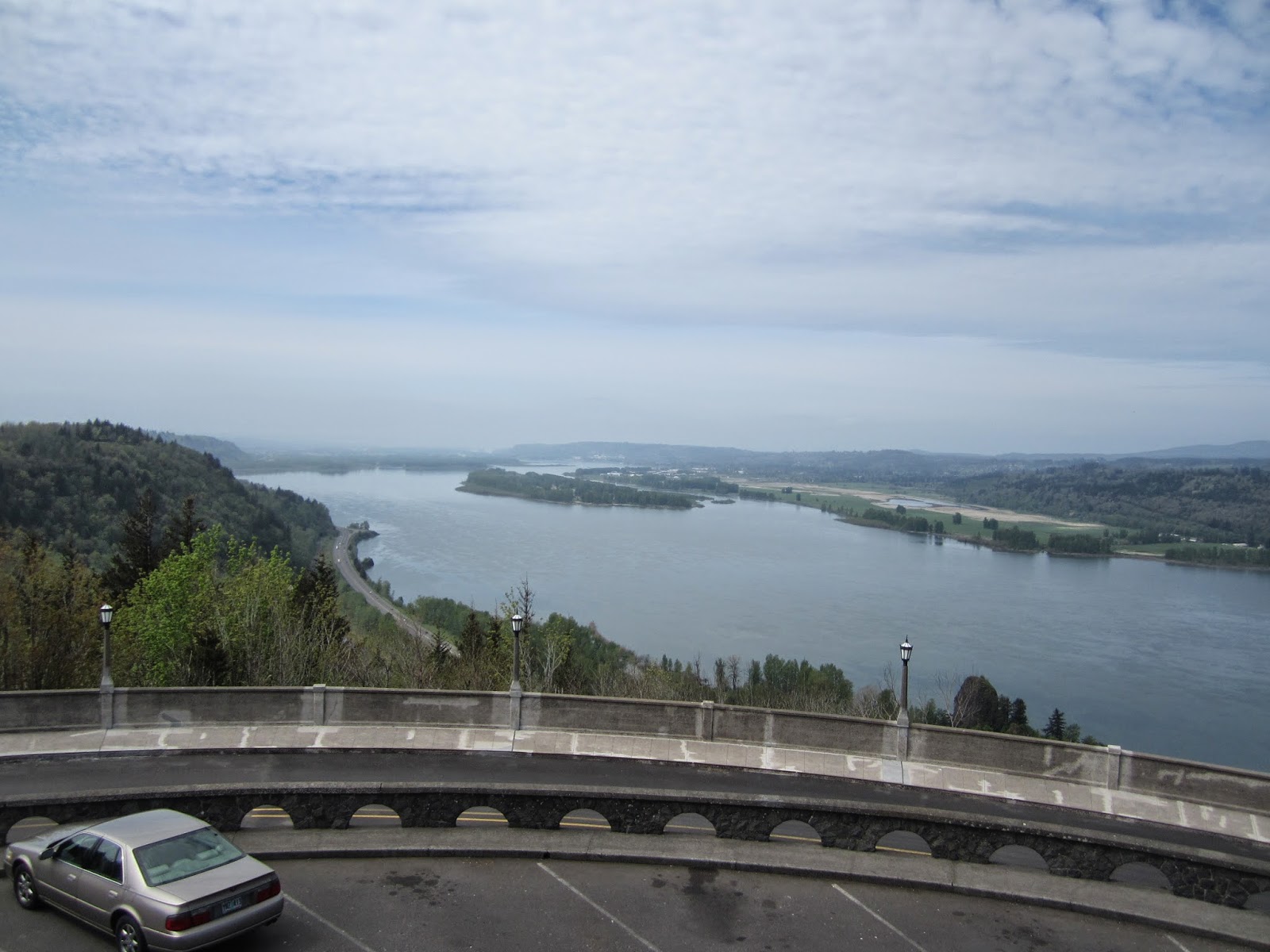 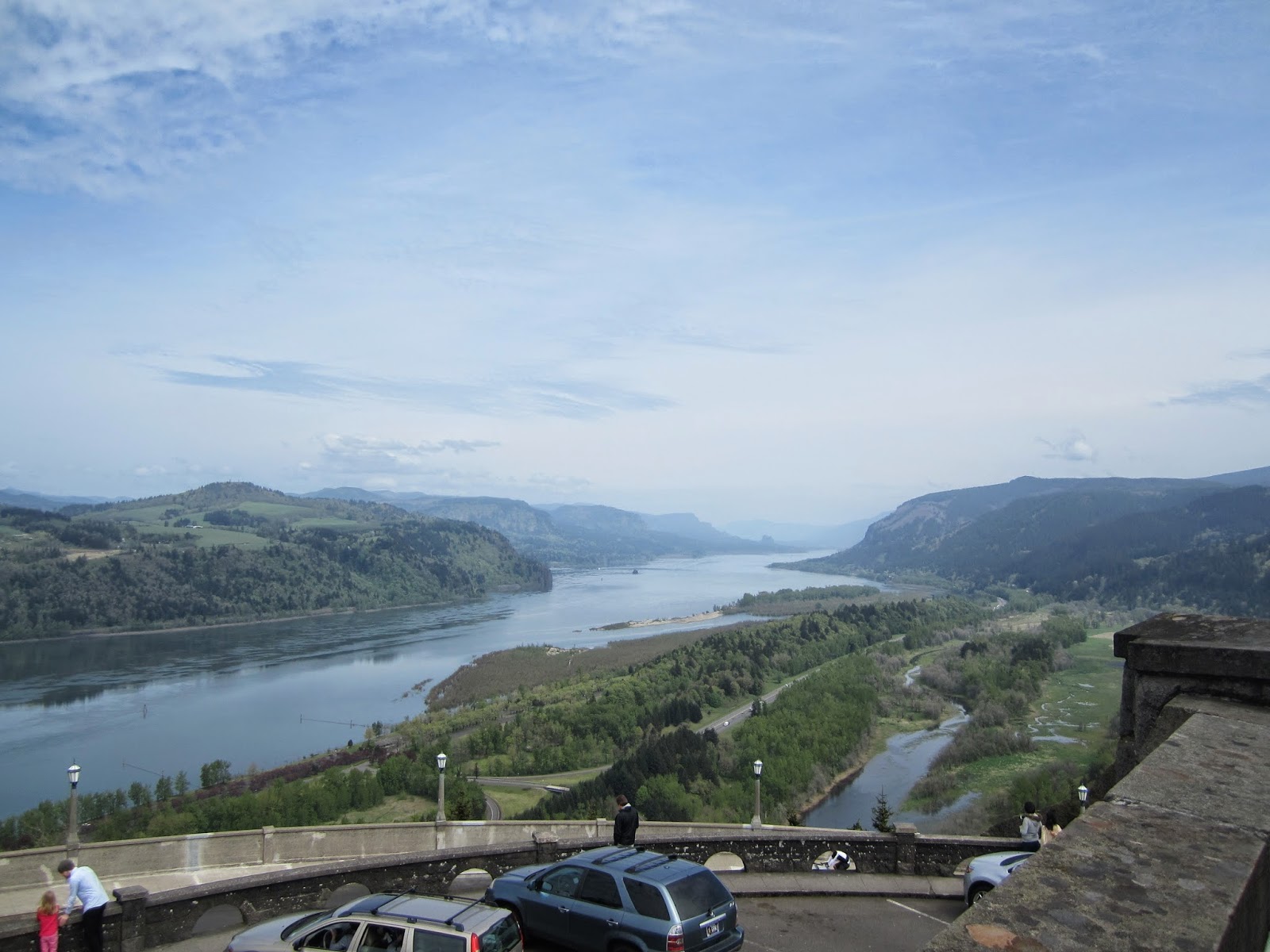 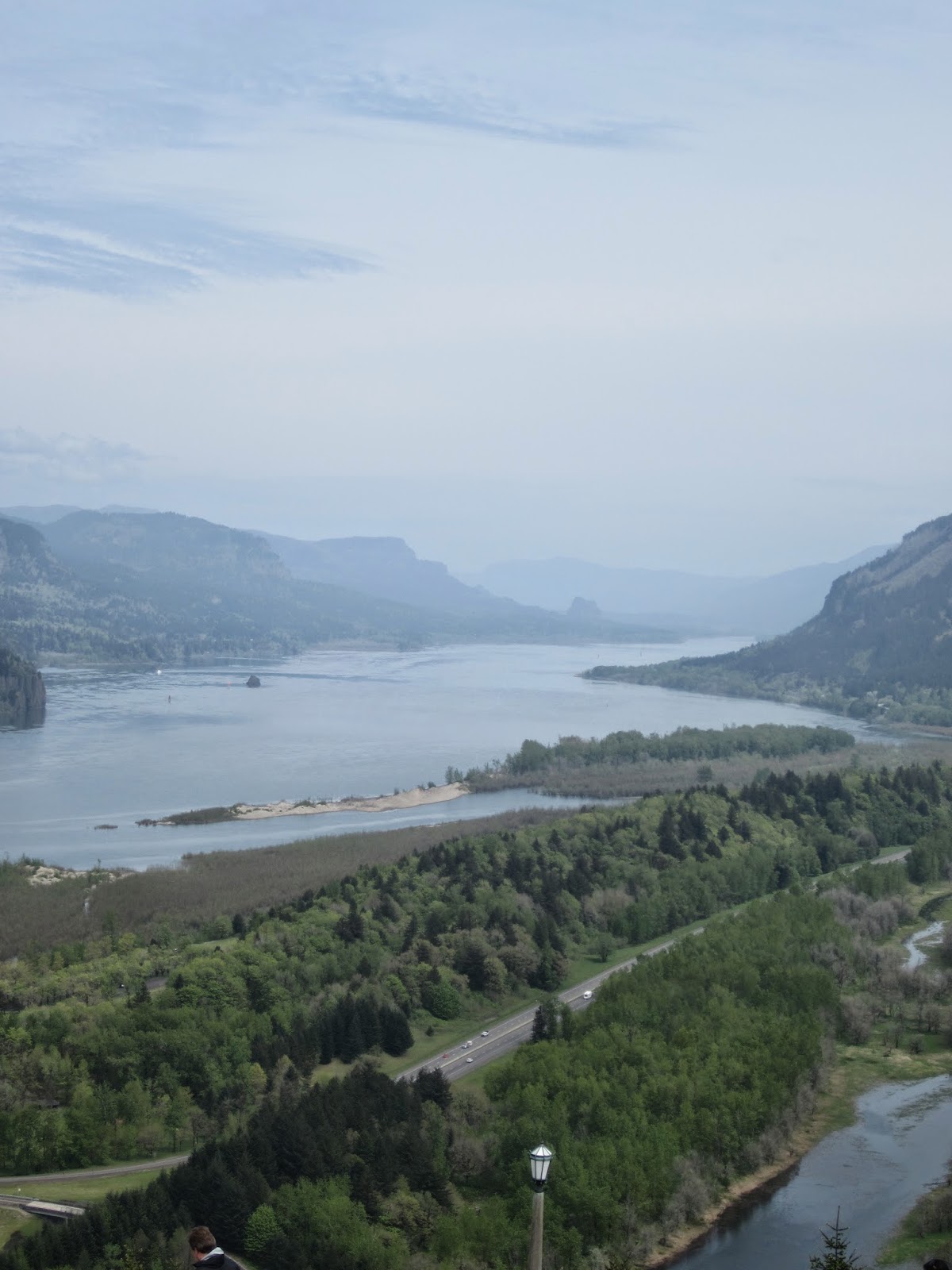 Views from the observation deck of Vista House, 2014 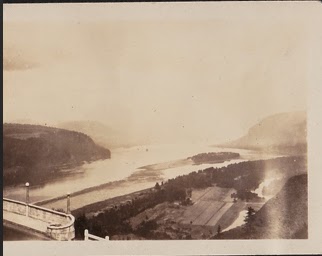 View photo taken in the 1920s from the observation deck 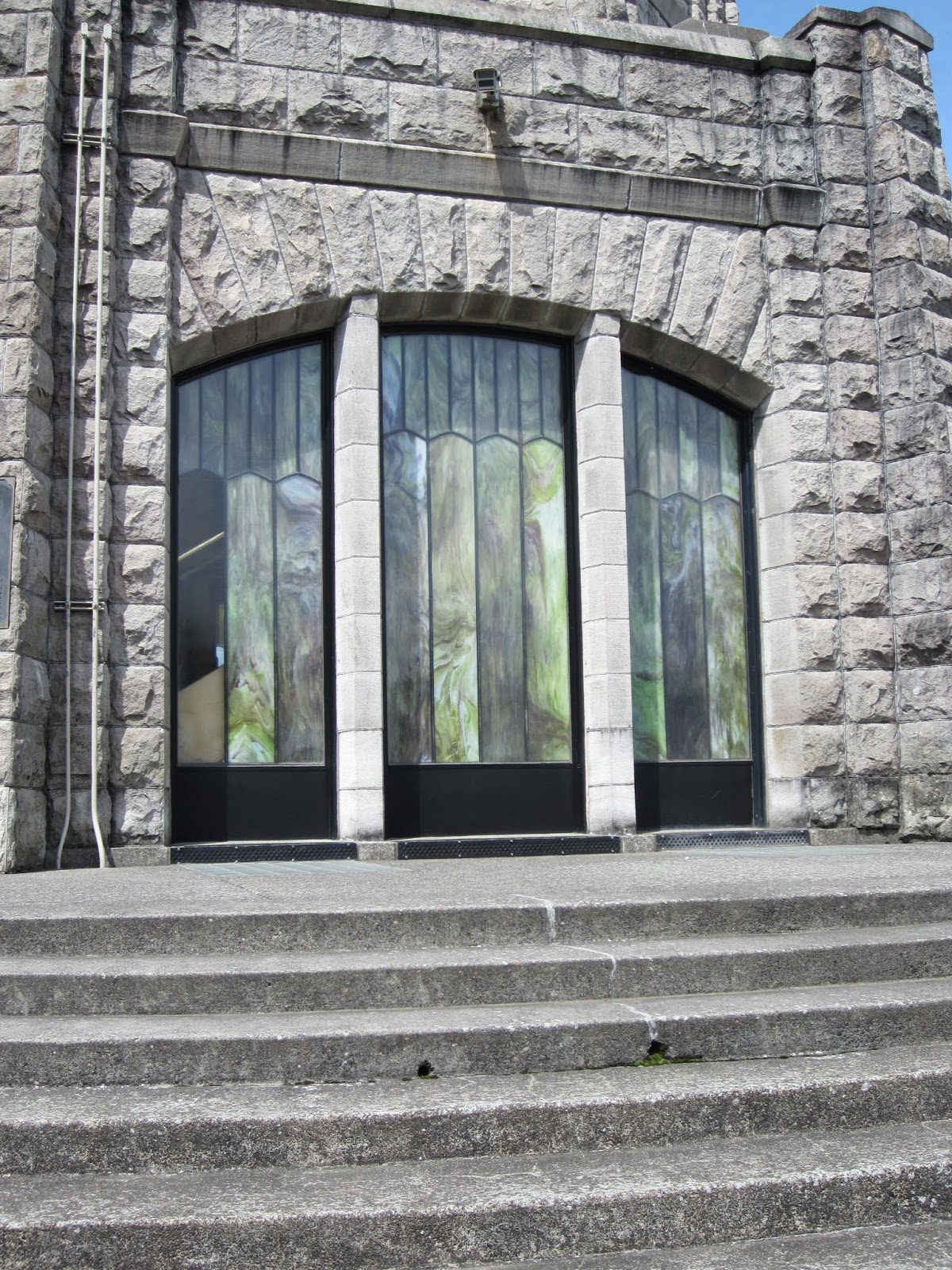 When he designed Vista House Edgar M. Lazarus used elements of the German Art Nouveau called Jugendstil that was popular from the late 19th century up to 1910.  The interior stairs lead up to an outdoor viewing balcony.  The windows in the rotunda are made of opalescent glass.  The Vista House is a popular tourist stop and rest area along the historic Columbia River Highway.  It was closed during the 5 years it took to refurbish and restore the building to its 1916 appearance.  It reopened to the public in 2005. 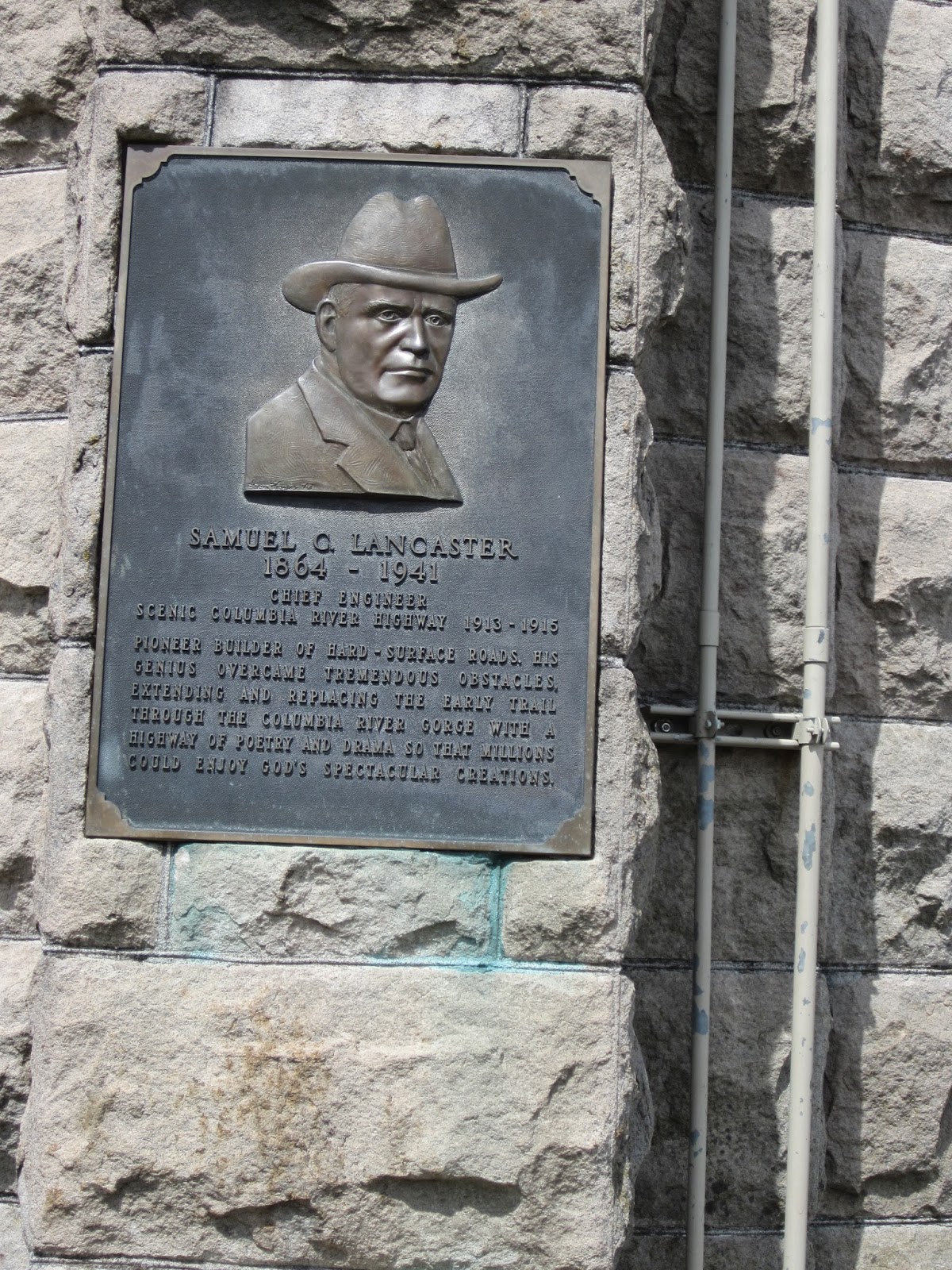